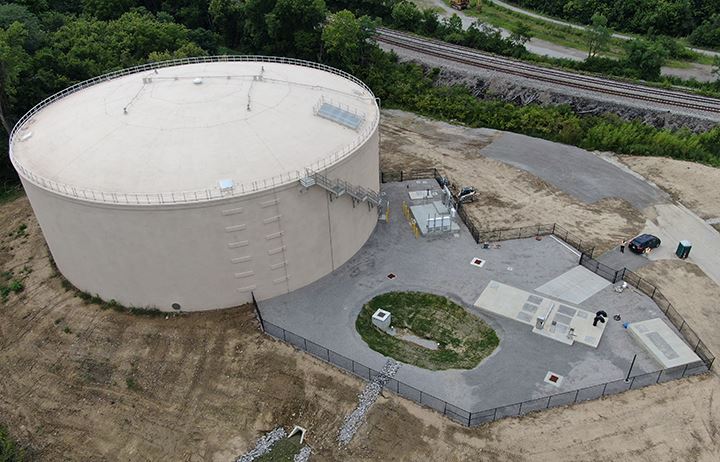 Sanitation District No. 1 (SD1) celebrated today the opening of a new wet-weather equalization (EQ) tank in Wilder that, in coordination with an adjacent project completed earlier this year, will eliminate about 47 million gallons of typical year sanitary sewer overflow (SSO).

Campbell County Judge Executive Steve Pendery was on hand to thank SD1 for its commitment to making the environment safe and providing the infrastructure needed for a vibrant economy.

“I’d say if you were to create a list of all the projects essential to the future of Northern Kentucky and at the same time underappreciated for one reason or another, there are a lot of sanitation projects that fit the bill,” Pendery said. “Over the course of my political life and across various administrations, including the current administration at the sanitation district, we have had a fabulous partnership among people who want nothing more than to make our lives safer and our community prosperous.”

The Wilder EQ Tank is an important part of SD1's Clean H2O40 sewer overflow mitigation program. It stands 61 feet tall and has a diameter of about 150 feet. When full, the tank can store about 7.3 million gallons of sewer system flow, preventing the region's sewer system from becoming overwhelmed by wet-weather events.

"This is an important day for the City of Wilder and for all of Northern Kentucky," said SD1 Executive Director Adam Chaney. "We are proud of our Clean H2O40 partnership with the Kentucky Division of Water and the U.S. Environmental Protection Agency, and we are committed to finding innovative and cost-saving ways to improve local waterways. Wilder Mayor Robert Arnold and Campbell County Judge Executive Steve Pendery have been important partners in this work, and I want to thank them for their continued support of SD1 and our critical mission."

Clean H2O40 relies upon a controlled storage and release approach to overflow mitigation. Tanks like the one dedicated today in Wilder hold excess sewer system flow until a wet-weather event passes, and then slowly release the flow back into SD1's system. Like smart stoplights can be programmed to reduce traffic during peak drive times, SD1 is upgrading its system to be able to reduce sewer overflows during peak system flow.

This smart-sewer management approach is an effective and economical alternative to traditional grey infrastructure. "We're making our sewer system smarter," Chaney said. "We can no longer afford to simply build bigger and bigger pipes and wait for them to become overwhelmed by larger and larger storms."

While the original price tag for Clean H2O40 was about $1.3 billion, that number has been nearly cut in half thanks to the controlled storage and release approach. And the EQ tank projects are proving even more economical than SD1 had expected. The cost of the Wilder EQ Tank was anticipated to be about $20.5 million but ended up only $11 million. This amounted to a savings of about 46 percent for the project.

And the new approach is paying off in other ways as well. With the Wilder projects completed, SD1 has already more than doubled its 2023 goal of eliminating 20 percent of our region's typical year SSO nearly a year ahead of schedule. In a typical year, the region's sewer system experiences about 115 million gallons of SSO; the Wilder projects eliminate more than 40 percent of that overflow volume. SD1's next Clean H2O40 goal will be to eliminate 75% of typical year SSO by the year 2029.

Prior to the Wilder EQ Tank, during a typical year, the area served by the tank experienced about 46 sewer overflow events per year, averaging more than a million gallons of sewage escaping the system and entering the Licking River each time. It was the most significant sewer overflow area in Northern Kentucky.

Wilder Mayor Robert Arnold said now that the EQ tank is complete, the city plans to further develop Frederick’s Landing, including building a bridge over Three Mile Creek and improving the land north of the landing. He emphasized that the new EQ tank is a win-win for everyone involved.

“This really demonstrates how projects can get done,” he said. “This is a successful project where the stakeholders came together. SD1 approached us and said, ‘We’ve got this project that we need to do; what do we have to do to get it done?’ And here we are three years later on the timeline that they had suggested, through a pandemic, at the completion of the project. And I think that demonstrates how stakeholders can come together, focus on an important project and get that project completed.”

Chaney said it was that strong sense of partnership that helped SD1 complete the project under budget and a year ahead of schedule. “The fact that we were able to meet our 2023 metric so early is a testament to our commitment to sewer overflow mitigation," said Chaney. "This Wilder project, along with projects across our region, will dramatically improve local water quality, helping SD1 to achieve its mission of providing our region with reliable and efficient wastewater and stormwater services that protect public health, property and the environment while supporting the economic vitality of our community."

Judge Pendery echoed those sentiments. “This is just one more example of how a community has a fundamental need and our friends – and I’ll emphasize that – our friends come up with the answers, the funding and the expertise that’s necessary to move this community forward,” he said. “I want to congratulate our community partners at the District on another stellar effort.”

The Wilder EQ Tank construction began last year. The designer of the project was Wade Trim Engineering and the contractor was Dugan & Meyers Construction.

Will be implemented by 2022